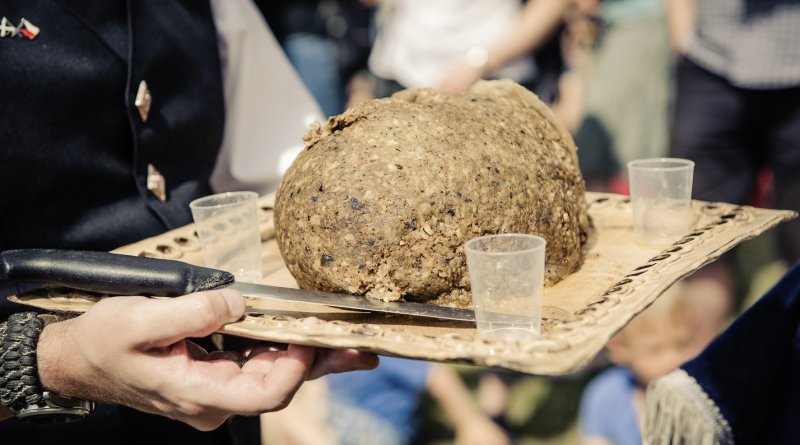 Haggis is the traditional national dish of Scotland, served at Burns’ Suppers (25th January – the birthday of Scotland’s national poet, Robert Burns), and on St. Andrew’s Day (30th November) – the patron Saint of Scotland. It comprises the heart, liver and lungs of a sheep, sheep suet, onions, herbs and spices, salt, oatmeal and barley. It is all combined in side a sheep’s stomach and boiled for an hour or more.

There are many recipes for haggis, though they are all pretty similar. It is served with mashed potatoes and turnips – in Scotland the dish is usually referred to as haggis, neeps and tatties. Today, vegetarian haggis is available, too. During these celebrations, the serving of the haggis is the main event of the evening. The lights are dimmed and the wail of the bagpipes is heard from the depths of the kitchens. The doors are flung open and the piper, in full Scottish dress, enters, followed by the cook carrying a the ‘hero of the evening’: the haggis on a silver platter. The third member of this singular procession is the honoured guest, whose privilege it is to recite the Address to a Haggis – a poem by Scotland’s national poet, Robert Burns. The procession winds its way through the hall, accompanied by the birl of the pipes, until it reaches the top table. The pipes fall silent, and the poem is recited, during which the haggis is cut up, after which the whole company toasts the haggis with a dram. And just as it was brought into the hall, the haggis is taken away to the sound of the pipes.

For unsuspecting tourists, the Scots have a tale to tell about the haggis:

The famous Scottish Haggis can be found on the slopes of most Scottish mountains. It is a cute little animal, the right legs longer than the left, which enables it to move about the mountainside at high speed. Unfortunately, this remarkable twist of evolution is something of a double-edged sword: the Haggis can only move around the mountain clockwise. On turning round to face opposite direction, the Haggis tumbles helplessly to the glen below, where trained Scottish Haggis Catchers are at the ready. The captured Haggis are then sold all over Scotland, where they are prized as an extraordinary culinary delicacy.